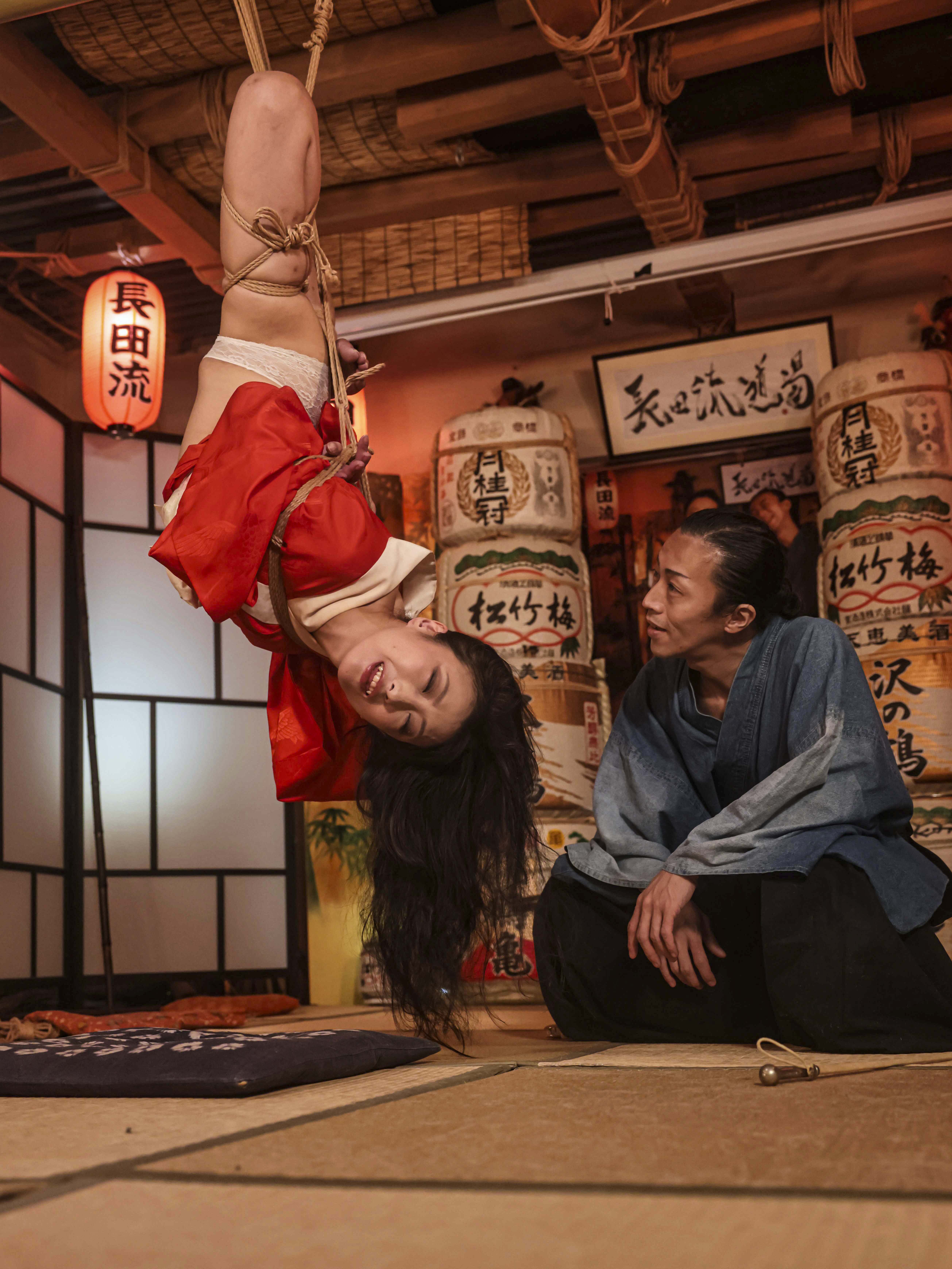 The system consists of strong (shoden, 初傳) and soft (toginawa, 伽縄) styles. It is imperative to be skillful in both styles.

Today's workshop is dealing with the strong style of the two-rope gote/takatekote (後手/高手小手) that Yagami Ren sensei is calling shoden kannuki shibari (初傳閂縛り). It is a 'strict' 2TK designed to prevent 'slumping' and is your prime choice for chest-based suspensions.

You will be amazed how much detail and how much thought about the bone structure is going into this tie. It also features torso wrap solidification techniques such as the yotsudome (四留) and the double (dynamite) cinching method of kannuki (閂) latching.

Technically speaking, this tie ranks among the very top 2TKs on the professional bakushi circuit and opens up a completely new level of tying. If you master this tie in all its intricacies your shibari will never be the same.

Inquiries and reservations for upcoming workshops are now being entertained.:

First Section
Available in days
days after you enroll

yotsudome – 四留, quadruple lock on the stem in the TK to prevent upper and lower torso wraps from separating. A method of solidifying.

Questions (from the chat)

JS: A question to what Yagami Sensei taught in the beginning: If you tie a model who is not able to position her elbows inside her shoulder width, would you stay away from suspension work entirely - or are there others ways to adapt to this situation?

Osada Steve (OS): You probably mean “would Yagami Ren sensei stay away from TK-based suspensions”. And I believe Yagami Ren sensei’s answer was or would have been a definite YES. Towards the end of the class sensei gave an example of a poorly designed (due to the model’s ‘slumping’) TK and what sort of discomfort it can cause.

To apply discomfort is ok as long as it is not the result of unskillful tying technique. Alternatives are using a front TK or using hip-based suspensions and dozens of other scenarios.

I have talked to Yagami Ren sensei about this matter after the class. He suggested if the rope partner insists on receiving a TK he would ‘customize’ the tie and out of necessity would use more rope. In any case, there will be a higher risk of a) aerial discomfort and b) injury. As long as both partners are aware of these risks they are welcome to try. You would have to negotiate.

Philosophically speaking in Yagami-ryu (as well as in Osada-ryu and Yukimura-ryu) we are tying with our partners to have a safe and pleasurable time together. We do not tie because we are under compulsion or peer pressure to achieve certain patterns.

Silent Teddy Bear: I wonder why is the bight being locked away, making it hard to untie the wrists quickly.

OS: Good question. Locking away the bight solidifies the stem (jikunawa/軸縄). This method of constructing a takatekote was taught to me directly by Akechi Denki (明智伝鬼) sensei.

Basically, Yagami Ren sensei is not a great fan of having a safety exit for the wrists (like in Osada-ryu where we do the ‘wrist tie’ in the forearms (kote/小手) with a slip knot).

Provided that the Yagami-ryu TK has been applied state-of-the-art the risk of injury is greatly reduced. If there is an incidence it will most likely be along the upper arms (takate/高手). Depending on the severity of the incidence there might be cases where a quick release of the wrists might be too late to bring help. But for less severe discomfort from blood flow restrictions and hand tingling there is a benefit (psychologically and physically) to release pressure on the upper arms by releasing the forearms. Especially if the TK was poorly applied to begin with. Especially if the TK was applied by a beginner who would take a long time to untie the TK at least to the point where the cinch lines (kannuki/閂) are gone.

In short, I definitely share your concerns about ‘locking away’ the bight into the TK.

narako: Does Sensei usually add a third rope to the kannuki shibari?

OS: Once a third rope is added the Yagami-ryu kannuki shibari becomes a 3TK or three-rope takatekote. Sensei does not ‘usually’ add a third rope. Only if the occasion arises.

Perky & Marzi: When doing the top set of wraps, are there any tips to finishing with even tension on all 3 wraps once the cross friction is tied?

OS: Good question. To assure even tension among all 3 wraps is also a challenge in other styles. The (diagonal route of the) first wrap originating from the kote column tie will eventually be further tightened when doing the cross friction. The amount of tightening depends on the original forearm position (normal, high, low) relative to the upper torso wraps.

In any case, with practice you will develop a feel for how to account for the different tensions in order to finally get equal tension on all 3 wraps.

You often see people inserting one or more fingers into the wraps hoping to equal out the tension, especially along the upper arm (takate/高手) area. In Yagami-ryu this would be physically impossible because the tightness of the wraps wouldn’t allow it.

OS: Do you mean ‘double column’ tie? ‘Wrist tie’ would be a misnomer because we want to avoid the actual wrist area which is not protected by flesh or muscles. The initial column tie should be placed around the forearms (kote/小手).

It’s difficult to give an answer. If too loose there will be too much play. I’d say tight enough that one finger can go through to avoid undue blood flow restriction. Perhaps Yagami Ren sensei would have a more elaborate answer.

narako: Is there any difference between the tension of the upper breast rope and the ropes under the breast?

OS: In the old days there was a theory to do the under-breast wraps with 30% less tension. In the old days people would also be cinching the upper torso wraps and the lower torso wraps separately. As Yagami Ren sensei explained (if I understood correctly) the tensions in the kannuki shibari are now the same – mainly because the chest is ‘trapped’ in position to prevent slumping. If the ukete (受け手, bondage receiver) slumps the upper body’s circumference/volume will increase and therefore the already tight TK wraps would become even tighter – and start to get painful. Through a properly applied kannuki shibari the ukete is prevented from slumping (hence ‘trap’) thereby assuring proper body posture.

Note: This was answered by Yagami Ren sensei as part of the recorded Q&A sessions.

OS: My 2 cents worth as follows.

With hoshu hojojutsu (捕手捕縄術) having been practiced as one of the 18 warrior skills (武芸十八般, bugei juhappan) of the samurai, the book by Fujita Seiko (https://tokyobound.com/blog/?p=260) should be of interest to all students of traditional Japanese martial arts. To subdue an opponent one would have to employ some jujutsu or taijutsu techniques.

Yagami Ren sensei has been practicing aikido since childhood and has developed a way to combine martial arts-based body control techniques with rope art. To an extent and level that has not been seen before.

IMHO, Yagami Ren sensei is adding a completely new dimension to the world of kinbaku as we know it.

S4T4N: How long were the ropes used?

Simon (Northernsnake): the picture on the background is lovely =)

Axel: When it comes to Yagami Sensei's style, I've read the term "Sekibaku". Could Sensei explain it or will it be covered in upcoming workshops? Thanks

OS: I have talked to Yagami Ren sensei about this and he suggests, for reasons of simplicity, to understand the term sekibaku (責縛) as another way to describe Yagami-ryu (鵺神流).

Jute dreaming ✌️ : By holding the rope lightly and not shifting the position of the wrists from their original position, would Sensei say that he is using the weight of the models arms themselves to determine the tension on the upper wraps as well as informing the rest of the tie - not adding more tension as might happen if holding the rope tightly and using his own strength.

OS: Not sure I understand the question.

Yagami Ren sensei often talks about ‘grip” – being it to grip ukete’s limbs (nigirite, 握手) or how to grasp the rope (nigiru, 握る). There are riggers that grasp the rope very hard. This should be avoided. Rope control should be smooth and fluid with a very soft grip. In addition to this the tension of the torso wraps is accomplished by using the rigger’s body weight.

An interesting aside, there is a term called tamanigiri (玉握り) which is grabbing someone by the balls.

E M: How much of that performance was improvised and how much was pre-planned?

OS: Prior to the start of the performance Yagami Ren sensei said to me, “And now I’m going to show how the kannuki shibari is applied in the field”. So the plan was to do a suspension based on the kannuki shibari. Which in turn requires attaching a suspension line and somehow getting the lower body (kahanshin, 下半身) into the air. Throughout the performance the height of the suspension was such that the ukete could touch down on her knees.

IMHO, the rest of the performance was completely improvised.

Silent Teddy Bear : Thank you very much for your elaborate and kind answer!

Moritz : I wonder if there is an itended difference in the tension between the upper and the lower wraps. Both seem equally tight to me in all the demonstrations that we have seen.

E M: What was during Hana-san feeling during that performance?

14:50:02 Von Mooooo : Thank you so much for the class, I learnt so much today, unfortunately I have to run 😭 I will see the rest at the recording. Really appreciated the class and the performance and the detailed explanations!

15:19:05 Von Moritz : Thank you all very much for this interesting workshop and the great translation! 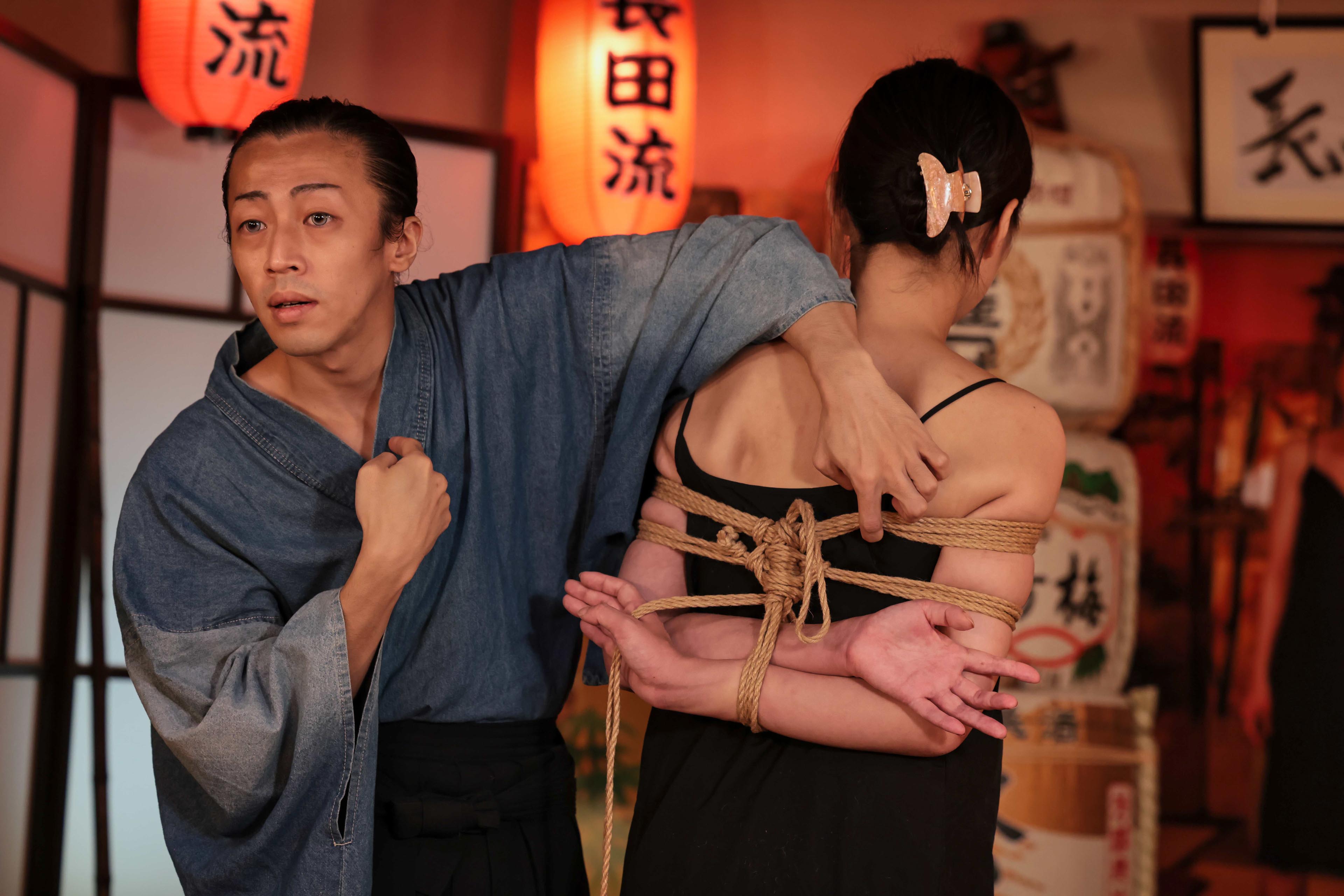 Explaining the virtues of the quadruple lock system to solidify the torso wraps. 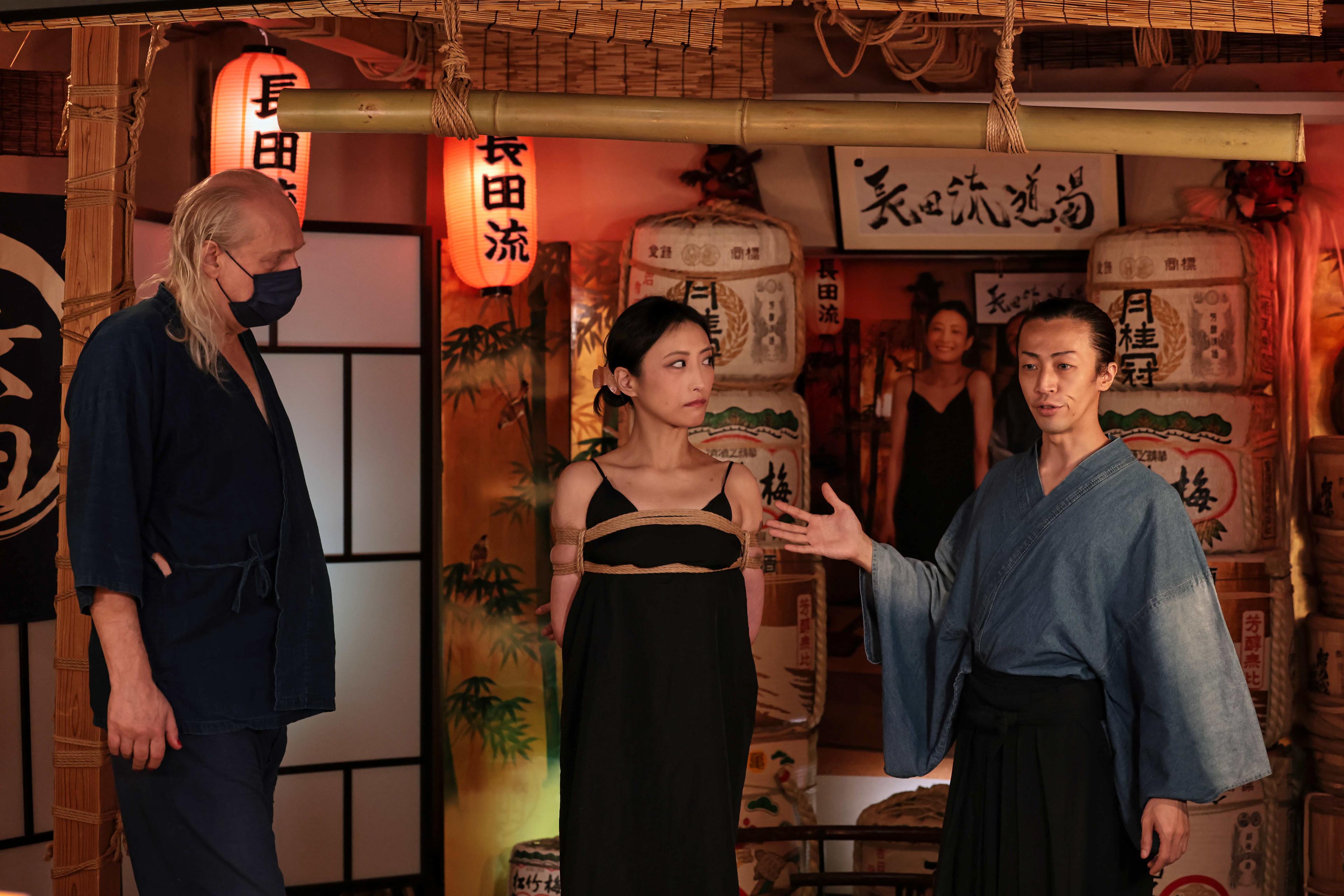 The tension is such that the chest is 'trapped' in a straight pose that prevents slumping. 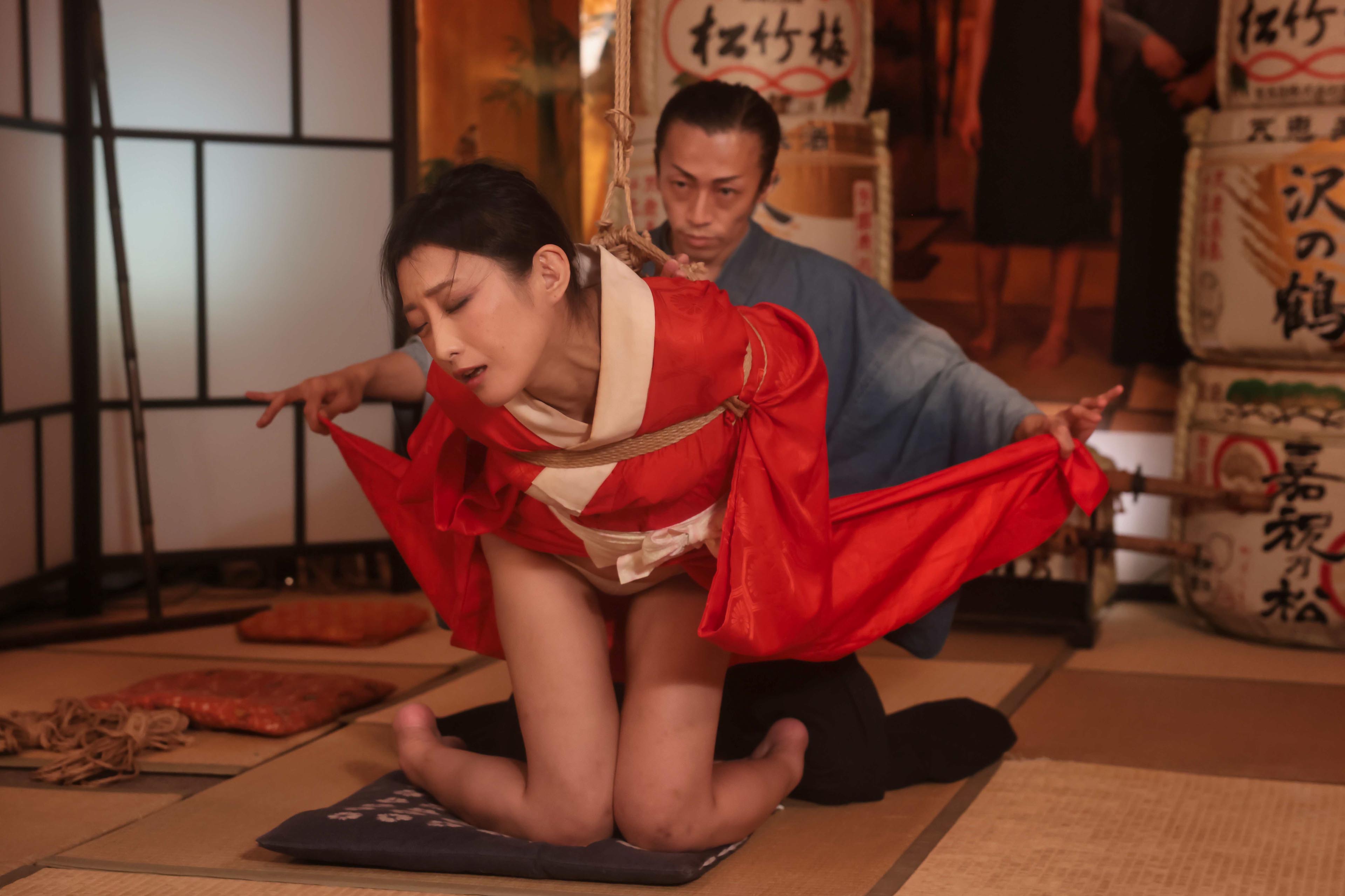 The kannuki shibari applied in the field in an exciting suspension performance.

Check out these exciting attractions and more.

How I inherited the Osada Kinbaku Dynasty

This bundle gives you access to all courses of Ninth, Eighth, and Seventh Kyu